Refrigerator (or not so!)
Used to keep contents cool but not recently.

The fridge is the original that came installed by Bavaria in 2003 and now in 2015 has as good as thrown in the towel.
We could carry on repairing the various components as they fail but now I think that it is time for a complete refurbish of the whole fridge.

Research on a number of Bavaria forums has persuaded me that the fridge as installed at the factory whilst probably adequate in temperate climates has a number of short comings in the warmer climate of the Mediteranean.

For the volume of the fridge box the mechanicals of the system are just within limit but given that the insulation around the fridge box is inadequate. The whole system was going to struggle to cope. Below are some examples showing the lack of insulation as supplied by the factory:


So one of the first jobs is to remedy the insulation.

Other Bavaria owners have filled all the air gaps with insulating expanding foam. The challenge is how to get the foam to the back of the fridge, next to the hull side.

We are due to fly out to Nidri in March to get this work done for ourselves.

This is how I got on:
First job; remove all the existing fridge mechanicals - compressor, evaporator and thermostat. 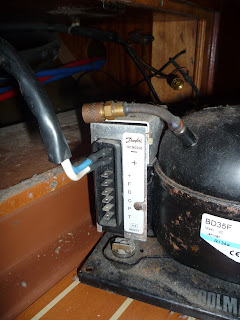 Picture taken to remind me of the wiring polarity.
Whilst the compressor and thermostat came out OK, it took a bit of digging around to get enough clearance to remove the evaporator supply pipe fittings.
Next it was time to tackle the job that I was most apprehensive about - removing the front panel to the fridge unit without damaging it. Having researched this, a number of other owners reported that the panel was held on by screws from the inside and removal was by inserting a hacksaw blade and cutting the screws.
NOT IN THIS INSTANCE - The fridge front on Darley Mist was not screwed on; instead it was glued and pinned from the inside. However I did succeed in removing the front panel with no visible damage. 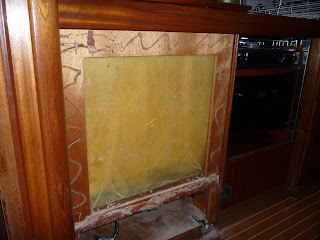 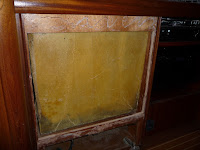 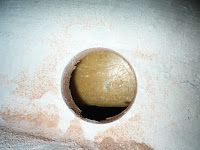 Then I went for my "gun" - the foam gun. After copious masking up I filled all the voids with fire retardant expanding foam. 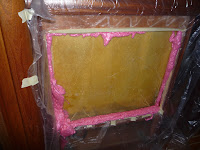 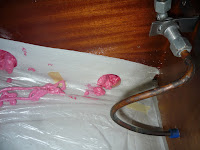 So good so far - now to wait for the foam to expand and set.

The excess foam was then trimmed off, the masking removed and the last piece of insulation cut to size. I used some 25mm thick Cellotex insulation for the front. It was easier to install and had a better insulation value than the foam. 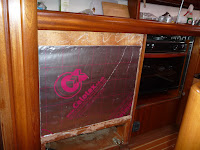 The front panel was then reinstalled.

With the fridge now insulated to the best of my ability and satisfaction I next turned my attention to the new mechanicals for the fridge.
I have opted for the Isotherm 2501 unit this is rated for fridge boxes up to 220litres.

Fitting the new evaporator proved a challenge as it is a tight fit in the top of the fridge box. However I am hopeful that we may be able to get ice from it.
What was very useful was the length of the coolant supply pipes to the compressor. These were long enough to be able to relocate the compressor to the unused space beneath the cooker. This space is larger than below the fridge unit thus allowing a greater airflow for cooling around the compressor.
This did entail opening up the front panel under the cooker and making up a floor to that new compartment. 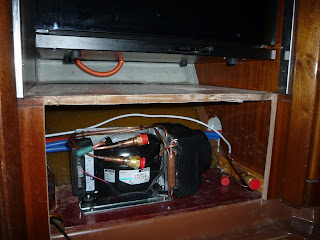 Here is the compressor installed but with the refrigerant pipes yet to be connected. 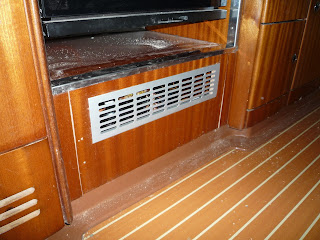 Now all connected up - front panel on and additional ventilation.

To be commissioned 1st May

Travelled out to a very wet Nidri in the Greek Ionian islands on 1st May.
1st job commission the fridge!
Connected up the wiring on the power supply and switched on.
6 hours later voila - ice for the G&T's.

Over the following few days did some final tidying up and securing of cables and pipes.
Installation is now complete and running beautifully - very pleased.

Uses less juice than the old system. I can leave it running through the night and by 9.00 am the solar panels had the batteries back up to 100%.